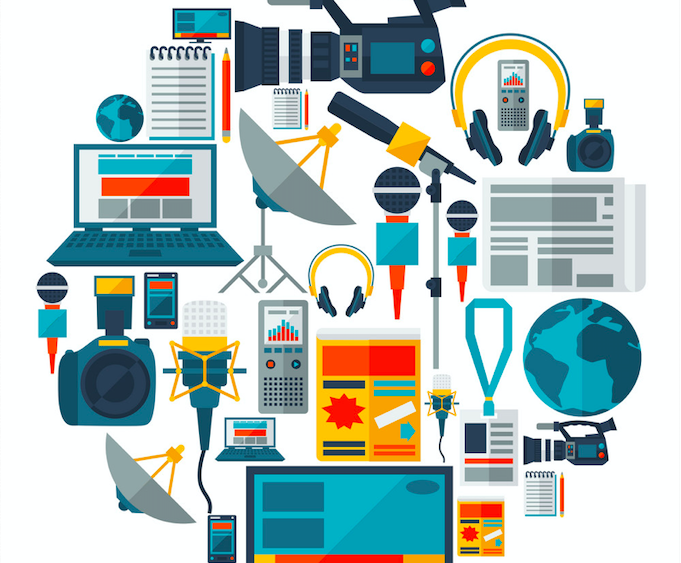 This second contribution for the Donald Reynolds Journalism Institute Fellowship covers mainly the topic of how hyperlocal solutions flourish to keep Latinos informed in the U.S.

There are 59 million Latinos in the U.S., composing 18% of the national population. Latinos are the largest ethnic group in the country, yet there is a lack of national or, in most cases, state communications strategies to keep them informed. And now during COVID-19, timely and effective communication can make the difference between life and death.

One of the most important findings so far in our empirical study on the obstacles faced by Latino journalists, is that one of the biggest challenges they face is access to reliable information and sources. This affects not only journalists at small outlets, but also large corporations, readers and this challenge has only increased with the COVID -19 crisis.

The Latino population has been disproportionately affected by the COVID-19 pandemic as many of them work in “essential services” that have not stopped even during partial and full shutdowns. This includes industries such as construction, meat packing plants, agriculture and janitors. They often lack health insurance and have limited access to critical local health information in their primarily language, Spanish.

Latino media outlets have played a crucial role in filling the gap between official state and federal sources and the Latino communities with hyperlocal journalism solutions, such as cultural and language interpretation to provide the vital information that is needed. 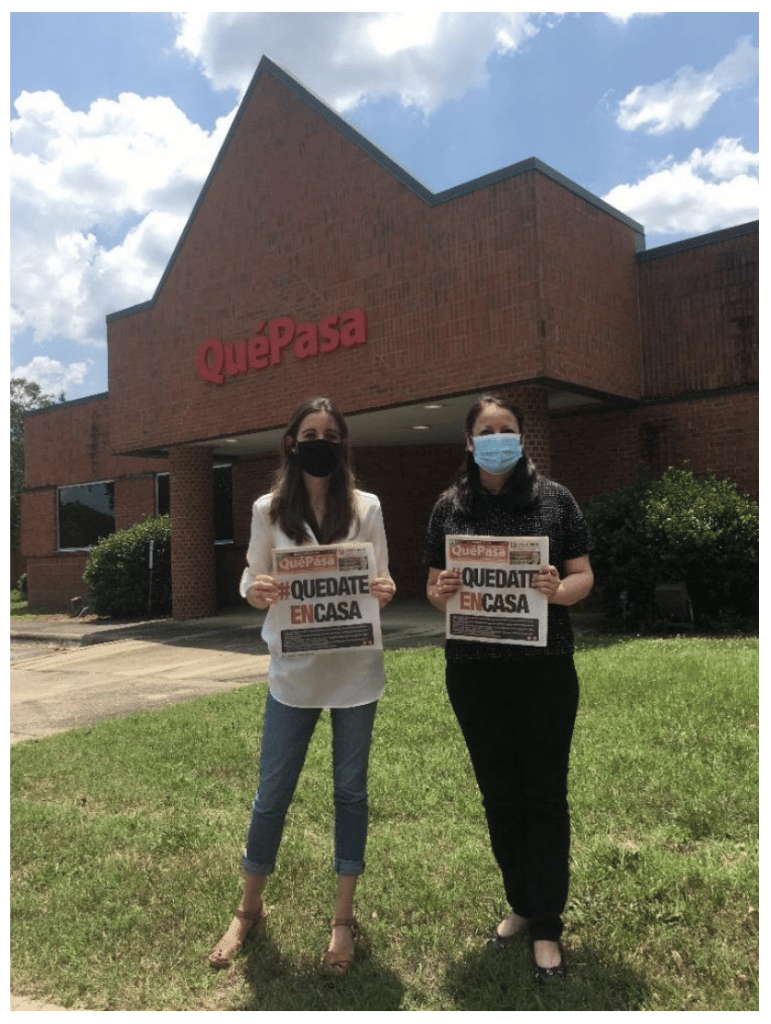 Karina Neyra, Executive Editor of Que Pasa Media, has been relentless in her work ethic since the pandemic started in the United States. This small newspaper has been covering local news in Spanish for 26 years, with three editions. They went digital eight years ago and reached an audience of almost 180,000 Latinos. Due to the pandemic, the Que Pasa team has shrunk to 25% of its previous staff. Almost all of their journalists needed to change their beats to adjust to the new needs of readers during the pandemic. Most were not used to covering health issues, nor working with data as a main driving factor of their journalism. But Karina and her newsroom team learned quickly, as they wanted to help save as many lives as possible by providing timely, valuable information to the Latino community.

Karina explained that although Latinos are among the most infected by COVID-19 in North Carolina, it took until June for the Governor to publicly acknowledge that Hispanos and African Americans are disproportionately being affected by COVID-19, when he signed the executive order EO143 Addressing the Disproportionate Impact of COVID 19 on Communities of Color.

This order didn’t come easy. Que Pasa worked against tough odds leveraging individual data about Latinos infected in each county for their report An Incomplete Recount: Latinos with COVID-19 under the radar. The outlet could only access information about cases in 16 counties out of 100. After repeatedly demanding the data sorted by ethnicity from each local Health Office, the journal was able to provide detailed information about 85 counties, and to write about the tragedy that in a state where only 9%  of the population is Hispanic, they were 45% of the infected population.

This is not the only case of governors not giving equal access to talk to Latino media. It took over two months until one of the two largest broadcast networks, Univision Dallas News, got an interview with Governor Greg Abbott to address the impact COVID-19 was having on the Hispanic community. Opening a spot for an interview was not voluntary but more likely the result of public pressure exercised through social media by the Latino channel which was also distributed  by the Dallas Morning News , and received even greater attention when the county’s highest authority, Judge Clay Jenkings, retweeted the stations’ claim and reminded Abbott of  “the obligation to communicate with all the constituents”.

Raquel Amparo, Univision Dallas News Vice-president, told Fundamedios that “this has been the most important time in my journalistic career. Connecting the audience with the leadership is crucial to answering key questions and combating misinformation.” Persistence and social pressure got the Governor to come to Univision, and ensured  his promise to repeat the interviews weekly. Her advice to other Latino outlets is “don’t give up and let your audience publicly know your process to demand answers from the leadership!”

Some authorities do not seem to understand or choose to ignore that the Hispanic media outlets are essential to informing the Latino communities who turn to these  trusted media sources for information during the pandemic.  Hispanics gravitate towards the Latino channels, newspaper and radio stations where the official information is translated for them, and, additionally, contextualized for better understanding.

As an example, during the pandemic the term “curfew” has been used a lot and the Spanish translation of the term “curfew” has been confusing depending on how it is translated. Put into a digital translator, as some press outlets do, it comes out as “toque de queda”. For Latinos, many of them fleeing authoritarian countries, this phrase means that your civil rights are suspended.

“Serving the community for the most basic understanding of events happening has been crucial,” explained Diego Barahona, La Noticia Director in North Carolina.

Latino journalists have developed new strategies to innovate and communicate with their local audiences in response to these gaps between official information sources and their communities. Penelope Muse Abernathy, Knight Chair in Journalism and Digital Media Economics and Professor at the University of North Carolina, called this civic work “advocacy journalism” and predicts that it will develop even more in the coming decade, even with the ongoing technical challenges for communities that face limited access to broadband. 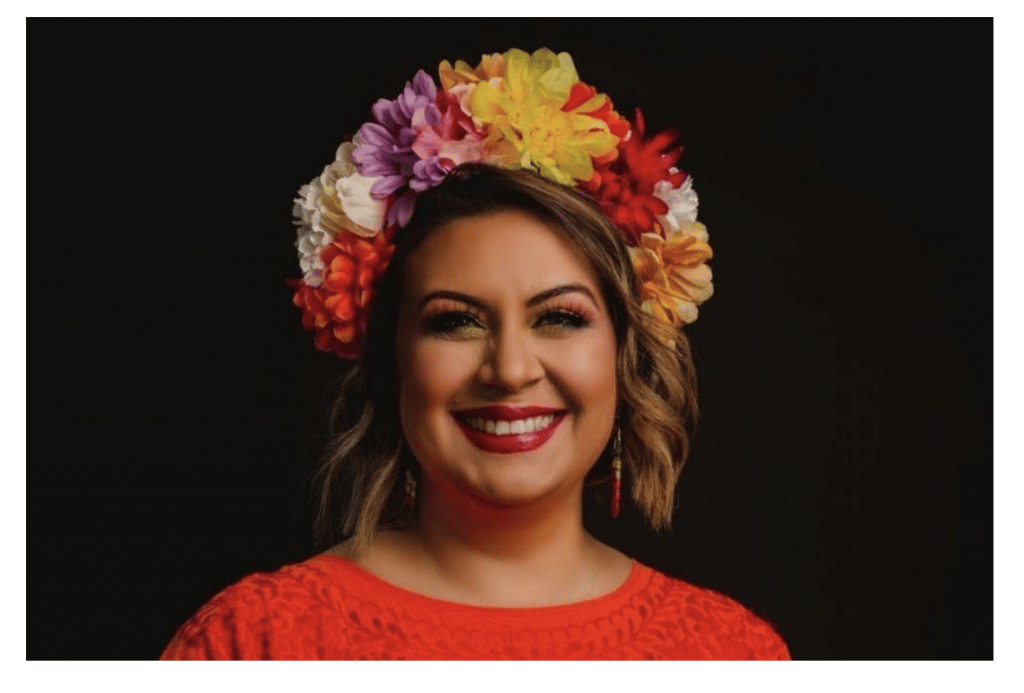 A great new initiative developed by journalist Maritza Felix in Phoenix is “Conecta Arizona ”. She brought to life the WhatsApp chat “La Hora del Cafecito.” WhatsApp is the largest network used by the Mexican community and it now allows this community to be regularly informed by Felix about new COVID- 19 cases, places to get tested, immigration policies regarding crossing the border, or legal concerns about visas.  (You can find additional information about a WhatsApp project currently underway by my fellow RJI Fellow Max Siegelman here.)

Felix says “this is a great way to connect with the Latinos, without demanding they use the limited internet plans they have on their phones.”  She started providing daily bulletins in the morning and then also in the afternoon, and has an open channel for questions anytime. “We are evolving in formats, despite the precariousness of Hispanic media, which doesn´t have resources, which has fewer reporters and less money”, said Felix. 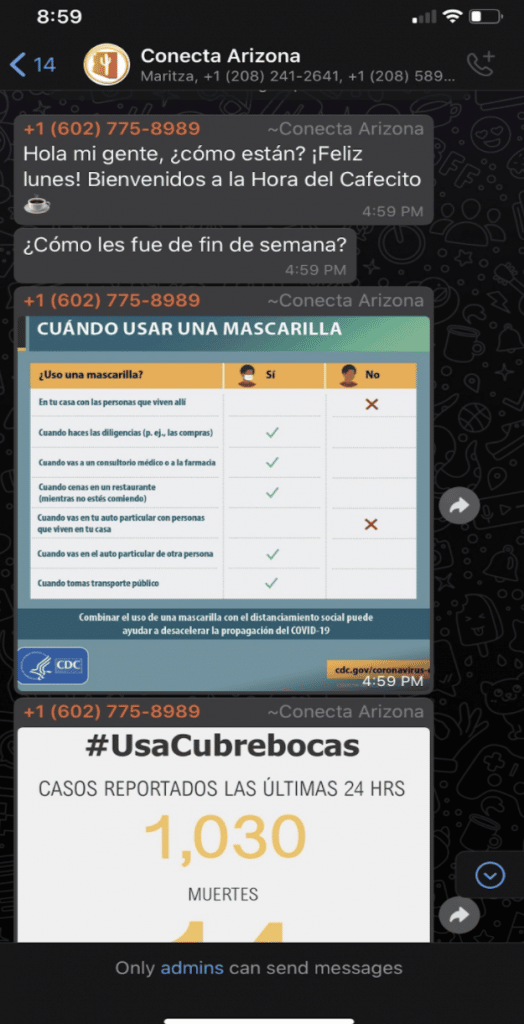 There is also El Timpano, in Oakland, California, which started a hyperlocal news dissemination system that reaches 450 Latinos over SMS on their phones. “The news we communicate are responses to questions raised over an open community microphone that collects the audience’s main concerns to provide direct answers», told us Madeleine Bair, an RJI fellow from the class of 2018-’19, who is married to a Latino and founded this organization to address the Latino news desert for the immigrants in Oakland.

A third example is Radio La Jornalera, an online radio station followed by agriculture workers in Pasadena, California, on their way to the fields every day. It constitutes an alternate voice for keeping the community informed and also understanding and defending their rights, was told to  us by Azalea Velazquez, who directs the program Central American Voices (Voces de Centro América).

Hyperlocal journalism solutions are great for local communities to access the information they need in a clear and contextualized form, but these solutions need to continue to be utilized by the communities after the pandemic for the news organizations who are engaging in them to survive. And that, is a very different challenge which will be addressed by Fundamedios’ in our next few months.