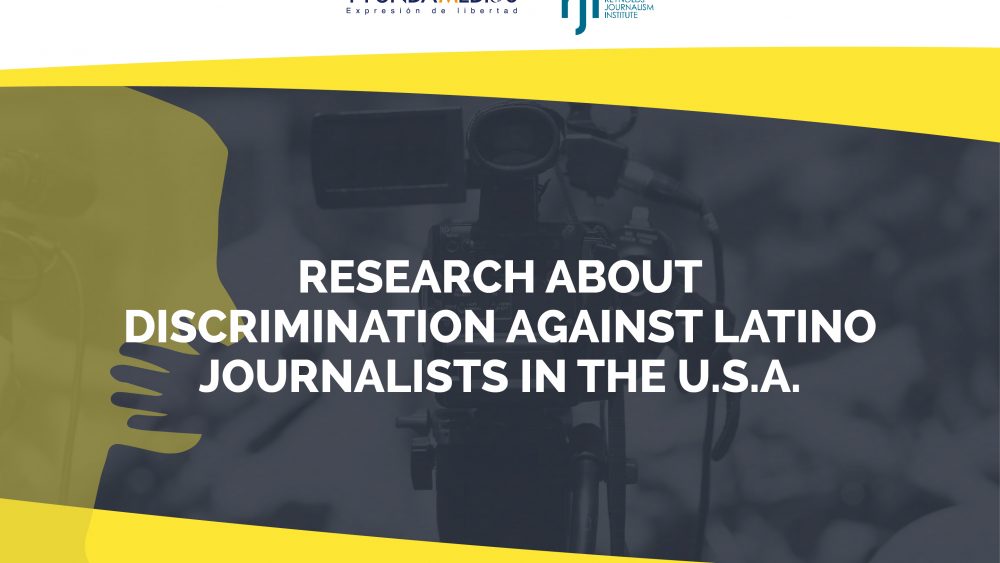 Research about discrimination against latino journalists working in the U.S.A. and how intimidation affects media outlets that are the main information source for hispanic communities

Discrimination against Latino journalists in the U.S.A. affects the environment of freedom of expression and access to information for the Hispanic communities in the country. This is the main conclusion of the research conducted by Fundamedios with the support of the Donald W. Reynolds Journalism Institute Fellowship 2020–21 and the Fund for Investigative Journalism.

Starting in June 2020 and for 8 months, Fundamedios interviewed 115 journalists and talked with representatives of 28 organizations about the working conditions of Latino media workers. 45% of the interviewed journalists said they had experienced discrimination.

The most common claim expressed was about differences in their working conditions or contracts. Latino journalists do the same job as their white peers with fewer resources, and less pay. The intersectionality of race and gender results in cumulative discrimination against female journalists who are of Latino origin. Latinas earn on average 37% less than their white male peers.

Underrepresentation in newsrooms and lack of Latinos in the leadership affect the way in which Latinos are portrayed by the media and therefore treated. Many journalists shared their experiences when receiving racist comments or attitudes. These comments imply that Hispanic journalists do not belong in that space or are too stupid to do that job. It happened mostly in newsrooms where they were a kind of “diversity token”. Some of the defamatory comments came from colleagues; others from audiences complaining about watching or reading news about Latinos. For some journalists, the racist attitudes toward them undermined their self-esteem, for others it encouraged them to fight to claim their place in American society.

Four years of offenses emanating from Donald Trump, the former president of the United States, have definitely harmed journalists’ safety and a unprecedent number of journalists have been assaulted or arbitrarily detained.

These findings have encouraged Fundamedios’ mission to protect freedom of the press and stand behind those journalists who have been harassed, assaulted, detained or discriminated against in any way. Independent journalism is an important pillar of democracy. And the democracy of a multicultural America is only real if all voices are being heard.

In addition, we work on solutions. In 2021 Fundamedios is addressing the journalists’ needs and is implementing a training program to raise awareness of the pay gap that affects Latinas. We are building capacity by coaching journalists to improve their negotiations skills.

Boosting Latinos entering in fair conditions the market place, by reducing the inequality they currently face and helping them achieve fair representation by gender and race in newsrooms. More Latinos will consequently demand from their information sources, better answers for their audiences and provide the Hispanic communities with access to trustful and reliable information.